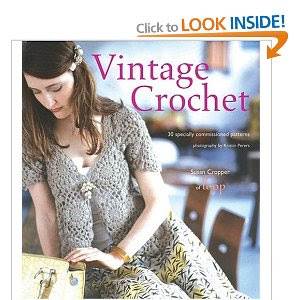 Loop Vintage Crochet
by Susan Cropper
This book kept turning up every time I browsed Amazon. I'm into the whole 'vintage'y thing, (loving Kath Kidston's collections and the whole Swallows & Amazons (ha!) Enid Blyton theme that's been running through garments and int
eriors these past few years) so I didn't take too much persuasion to invest in a book that hit my taste buds twice.
(Image courtesy of amazon.co.uk)
I could hardly wait for my new book to arrive on my door mat and settled down happily to relish it when it arrived. But, though there is some beautiful photography and one or two nice ideas, I have to confess to an initial feeling of mild disappointment. Maybe I expected too much of it? I don't know. I think the single biggest thing that interested me from the advertising was a cushion cover that appears on the back cover, and that turned out NOT to be included in the patterns at all, but merely to be plonked on a bed covered in a crocheted BLANKET which WAS featured. The BLANKET I could see at a glance how it was made - using a wave stitch there were instructions for in Melody Griffiths' 201 motifs......
Still, I think I more or less worked out how the stitch was completed on my own......
No I didn't really like all the doylies and one or two other somewhat baffling pieces like a sort of knotted net tent that didn't keep the sun off or keep anyone warm....So perhaps directly it was not such a good source of patterns I could use. However (and it's a big however) it IS a beautiful book and the editorial is warm and friendly and makes you want to visit their Islington shop (haven't done so yet - it's slightly off my usual routes!) And as I mentioned before, I'd seen instructions for the wave pattern in another book but I have to say Loop Vintage Crochet made me want to actually try it and inspired me again in pos 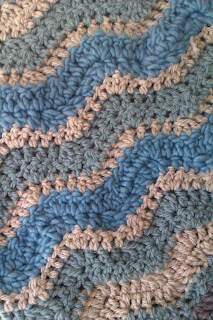 sibly the most creative way I had been so far! Perhaps it was something to do with its source being so much closer to home, but I began to feel much more confident about striking out on my own after reading this book and started making sketches for NEW ideas, and beginning to crochet swatches for entirely original pieces of my own. So thanks Loop, for the sea change in my view of the craft and its possibilities!
This book is available from Amazon at: CLICK HERE
My attempt at the
wave pattern
after seeing it used
in this book
Posted by Lindy Z at 14:17